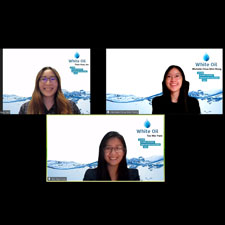 Team White Oil is comprised of three passionate individuals: Michelle, Huey Jen and Wei Ywin (Apple). They are students from the National University of Singapore (NUS), pursuing their bachelor’s in civil engineering.

Recently, the team emerged first in the Xylem Global Innovation Challenge with a proposed solution of solving the increasing water footprint caused by the battery production. This idea was first inspired by how electric vehicles, which are commonly known to be greener, have higher freshwater ecotoxicity impact as compared to combustion engine vehicles. An astonishing amount of 500 000 gallons of water is used to produce 90 electric cars. Additionally, lithium mining consumes large amounts of water as well as causing possible leakage of pollutants into freshwater bodies. This greatly reduces freshwater supply and even causes death of livestock.

To reduce water consumption as well as minimize exposure to pollutants, the team proposed a new method to replace the traditional method of solar evaporation. The solution proposed a controlled environment using the latest energy efficient membrane filtration system, coupled with ideas to contain chemical leakages.

The team hopes to bring the idea forward and reduce water footprint in producing electric vehicles. As a little drop of water makes a mighty ocean, every water counts.