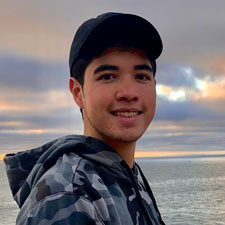 Growing up on Florida's coast, Nicolas has been surrounded by water and the ocean his entire life. This connection to nature has fostered a strong passion for advocating for environmental conservation and ocean-based climate solutions. Nicolas is a trained Climate Reality Leader and previously served as a Senior EarthEcho Water Challenge Ambassador for two years, educating his community about water quality monitoring and the importance of protecting local waterways. In 2019, Nicolas also founded his own environmental initiative, The Grove Project, which raised awareness about the importance of south Florida's mangrove ecosystems and led conservation efforts in his local community. As a member of EarthEcho's Youth Leadership Council, Nicolas leads policy and advocacy initiatives in the United States aimed at protecting and conserving at least 30% of the global ocean by 2030 and empowering youth voices in order to build a durable ocean conservation movement. Through his advocacy work, Nicolas has engaged the United Nations and has had the opportunity to address world leaders on several global stages, including at One Planet Summit for the Oceans in Brest, France and Climate Week NYC.

Currently, Nicolas is working as a Team Coordinator at World Surf League PURE, where he supports the team in executing the WSL's sustainability and social impact initiatives around the world in order to inspire, educate, and empower ocean protection, starting with the global surf community.

Nicolas believes that our government is the most effective venue to make the systemic changes we need to combat the climate crisis and other environmental issues. He plans to pursue a career in law, policymaking, and government in order to continue being a fierce advocate for our planet and future. In addition to his environmental advocacy, Nicolas is an avid surfer, scuba diver, and runner.