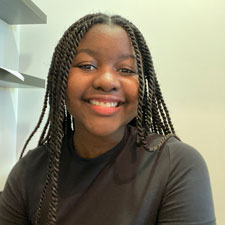 Miyanda Hamalala is 17 years old and originally from Zimbabwe, however she is currently living in Angola.  She recently graduated from high school and is transitioning to university where she will pursue undergraduate studies in Media, Public Relations and Design. Miyanda joined this Fellowship because she believes in it’s cause. She feels we should all be more concerned about the planet we call home and knows the youth of today hold immense power to make positive change. Miyanda is really looking forward to participating in and contributing to the campaign to achieve the 30x30 goal.

My main aim was to reach local environmental organizations as well as the general public with more information about the 30x30 goal. This way I increased awareness about ocean protection and conservation and also create a lasting impact beyond my campaign with the help of partnering organizations. My first action in my campaign was a petition I made representing the Angola youth. This petition was a call to action to the Angolan president and environmental ministers to discuss 30x30 in their upcoming meetings with other African leaders. This was in efforts to get Angola to lead other African nations to be champions of this goal. My second action was participation in beach cleanups led by some of the NGOs I was partnering with in order to raise awareness about plastic pollution and its effects on our ocean. Lastly, the main event for my campaign was an Education and Awareness Webinar. For this webinar I invited 5 other expert panelists to make presentations about the importance of the work they do here, and its connection to the ocean. We had presentations about sea turtle conservation, mangrove restoration, Marine protected areas, plastic pollution and many more, in which the audience engaged in and asked questions.