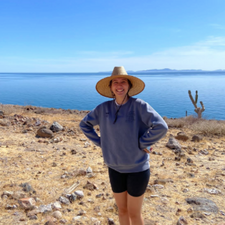 Mariana is a 21-year-old from Tampico. She is currently studying marine biology at Universidad Autónoma de Baja California Sur. Growing up near the beach, she developed an interest and love for animals and plants; but mainly, she developed a big appreciation for water and the big role it holds in various ecosystems. Later in life, Mariana became aware of all the problems surrounding this resource, like contamination and climate change. This, and her love for animals, influenced her decision in studying marine biology. Being part of this career her motivation for taking care of nature has increased more and more, hoping that being an EarthEcho Water Challenge Ambassador will help her in making a change.