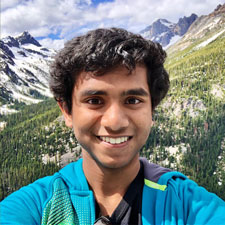 Maanit Goel is a high school sophomore from Sammamish, WA, working towards a brighter future for our species through a variety of approaches.

In his own community, Maanit has organized a coalition of youth from across the Greater Seattle Area, pushing for a public, volunteer-based environmentally advisory board to be implemented at the city level in his own hometown and in surrounding municipalities. He was also elected as the 2021-2022 Chair of his city’s youth board, and is directing an effort through this board to push for an environmental bill at the state level, for legislative progress.

At a wider scale, Maanit serves on the Project Green Schools’ National Youth Council, through which he has collaborated with environmentally-focused businesses from around the world, and paneled at Climate Week NYC 2020, an event co-hosted by the UN General Assembly. Through his work with Project Green Schools, he aims to promote sustainability not as a distinct path but as a given to be woven into every aspect of life from a young age.

In the private sector, Maanit serves as a youth advisor to leading cultivated meat startup Aleph Farms, with a focus on sustainability and accelerating acceptance of cultivated meat worldwide. He believes that necessary global environmental shifts can only be achieved in a reasonable timeframe through broad systemic improvements rather than incremental progress, and his work executes on this philosophy.

In his free time, Maanit collaborates on astrobiology research with a graduate student at the University of Washington, and studies octopus cognition using data science techniques with another research group at the University.

Through EarthEcho, he hopes to not only raise awareness in but also mobilize communities in the Greater Seattle Area to take action towards restoring Southern Resident Orca and Chinook Salmon populations native to the Salish Sea.