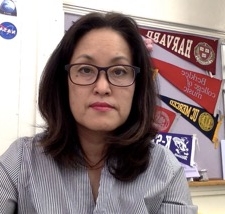 I was raised in Los Angeles area since 10 yrs of age and lived here since then except for a few years, so I am aware of the water challenges faced by California.  When the term climate change was not discussed in the households around the nation, I earned a B.A in Biochemistry from University of California San Diego. I have been teaching middle school science since the beginning of my career and this is my fourth year teaching four gifted classes of 7th and 8th graders.  Since 2016 I’ve been the coach of the Science Bowl team which will compete this year for a spot in the finals in Washington D.C.  This year we also expanded the team to include all three grade levels; 6th , 7th and 8th.

My children are grown and out of the house, so I replaced them with two cats named Biscuit and Corona.  My daughter says I should  change Biscuit’s name to Tequila, but I can’t do that because I’m a teacher and Corona is the solar kind not the chemical kind.