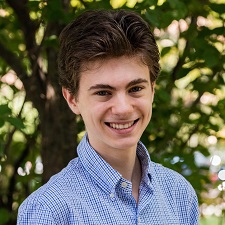 Demetri Sedita is a 16-year old homeschooler from Tampa, Florida. He, along with his brother, founded their own environmental protection initiative called Green Gasparilla with the goal of targeting a localized source of plastic pollution resulting from the Gasparilla Flotilla. Gasparilla is an annual mock-pirate invasion in Tampa that consists of multiple parades over about a month’s time. This includes a flotilla that is made up of thousands of boats traversing the local waterways. It has become a tradition to throw plastic, Mardi Gras-style bead necklaces during the parades, including the flotilla. As a result, massive amounts of plastic beads end up in local waterways. These beads sink to the seafloor where they break up into microplastics and leach toxic chemicals into the water. The purpose of the organization is to raise awareness about the harmful effects that these beads have on the environment. They also work to remove existing beads and other trash from the waterways, often through the organization of large community diver cleanup events. They have recently joined forces with the City of Tampa to create the #beadfreebay campaign to raise awareness about the environmental dangers posed by the beads. Demetri leads the social media presence for the organization, and he has extensive experience in video production and editing. He has produced many PSA-type videos for Green Gasparilla and has won multiple video contests. In his free time, he likes to practice keyboard for his band, ride his bike, and play street hockey.