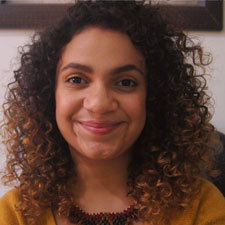 Bruna Valença is a climate activist born and raised in Rio de Janeiro - Brazil. Since 2017, she has been working on projects related to the environment at her college. However, in 2020 became part of Engajamundo, an NGO made up of young people for young people, where she created Brota no Clima, climate education and communication program for young people from the periphery. She is also SDG Coordinator at her university for SDSN Youth.

The campaign idea was to mobilize young people 15-29 years to support the 30x30 ocean target with three approaches: Activism, Education, and Policy.

We did two mapping projections in two states of Brazil, Rio de Janeiro, and Recife. The main idea of the projections was to share our messages with the people that don’t belong to the conservation algorithm on social media and spread our messages in cities that are going to be severely hit by sea level rise. The mapping projection lasted 2 hours long each. We also did two clean-up days at beaches in two states of Brazil, Rio de Janeiro, and São Paulo. All of these actions turned into 9 TikTok videos with 3,151 views using #30x30brasil. We also wrote an article for a local journal called "Empower Journal" to explain the importance of the campaign.

We had two educational events, the first had the goal of showing problems that the ocean is facing. "Let’s talk about the Ocean Conservation" was led by me and followed Engajamundo`s methodology called "Paths of Solution" where the speaker shows a video that exposes the problem and encourages everyone to discuss and think about the solutions, in the individual, collective and political level. In this event, we had 17 participants. The second one was a deep-dive into ocean conservation and we had Juliana Poncioni, Director of Parley Brasil as speaker. She shared all her experiences in sailing, conservation and taught us about the AIR methodology to solve the plastic pollution problem, which stands for Avoid, Intercept, and Redesign. In this event, we had 30 participants. We also made content for social media to explain the relationship between the ocean and climate, the issues that the ocean faces, and the meaning of the 30x30 goal.

On the policy point, we did a petition that already has more than 1,000 signatures to press the chairman of the chamber of deputies to approve the National Policy and Sustainable Use of the Brazilian Marine Biome, which has the goal to promote the equitable, efficient, shared, and sustainable use of marine resources and ecosystems. To create this petition, we had help from the League of Women for the Ocean.