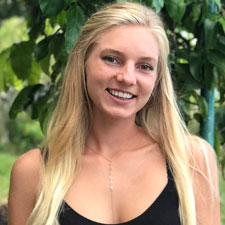 Bronwyn Kay is a conservationist born and raised on Kauai in Hawai’i. She has a Bachelor's degree in Environmental Science. She has been involved in conservation efforts in Hawai’i since high school. As President of her school's Nature Club, she organized events for beach cleanups, reforestation, and invasive species remediation on the island. She’s been involved with the NPO Nāpali Coast Ohana, surveying endangered endemic plants and conducting annual reef surveys with Eyes of the Reef in collaboration with Malama Na Apapa, at Nualolo Kai. As an active surfer, she’s been entranced with Hawaii’s marine ecosystem for as long as she can remember. She has shared her passion for the ocean while crewing a tour boat company along Kauai's picturesque Nāpali Coast and sharing her knowledge of conservation efforts and the island's unique reef to visitors. She intends to pursue work directly in conservation in Kauai as a career.