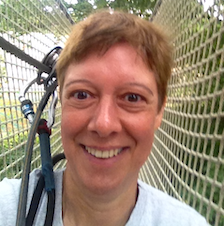 Alix has worked as a gardener, lab technician and finally as a science teacher since 2004 and sustainability coordinator since 2010.  She has a biology degree and has always been interested in conservation. Alix went to Borneo for a week in 2012 with Camps International and Ecuador and the Galapagos in 2017 where they built lots of structures and worked on curbing invasive bamboo.  During her time as sustainability coordinator, her students have built a pond and wildlife garden and grow organic vegetables which they sold and sent the proceeds to the WWF. As part of Alix’s degree, she studied ecology and did a lot of sampling of freshwater invertebrates, plants in set aside land and meadow, hybridization of oak trees in North London. She also volunteered with BCTV in the 1980s.