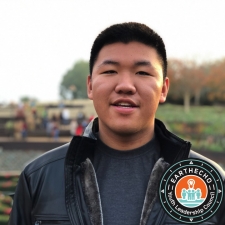 "The greatness of a community is most accurately measured by the compassionate actions of its members." (Coretta Scott King)

After being awarded the National Ben Carson Scholarship, Victor has increased his involvement in changing his community for the better. He appreciates his family, friends, and school faculty for their support in becoming the person he is today. Victor is a 17 year old senior at Glen A. Wilson High School in Hacienda Heights, California, and has been always globally aware of making Planet Earth a greener place. Through MIT Launch Entrepreneurship, Victor founded a sustainability company (WeFarm) geared towards providing farmers with urban opportunities to deliver fresh produce straight to a customer's doorstep. The idea won 2nd place in the Western Region through the Global Launch Entrepreneurship competition. Victor also founded his global 501(C)(3) education nonprofit, InnovaYouth, which strengthens research, collaboration, and communication skills through workshops and conferences to empower students to become community changemakers. Under his leadership, InnovaYouth has expanded to over 15 states and 3 countries, and directly impacted over 7000 students. Victor accumulated over 600 hours of community service and has presented over 25 workshops through InnovaYouth's partnership with the Los Angeles County of Parks and Recreations on topics like social innovation, effective public speaking, and self-confidence. Because of his outstanding humanitarian work, he was awarded the 2019 International Diana Award for creating and sustaining positive social change in memory of Princess Diana. Through the Diamond Challenge Entrepreneurship Competition, Victor also received 2nd place in California for presenting InnovaYouth in the social innovation track. His nonprofit has been featured in Paradigm Innovation's Catalyst Magazine, as "10 Growing Companies to Watch Out For in 2019". In addition to his nonprofit, Victor was also elected to the national council of Future Business Leaders of America (FBLA) as the Western Region Communications Director, serving over 25,000 members in 10 states. He has implemented with his council multiple social media strategies that have connected thousands of FBLA members together on community service projects and assisted with the planning of FBLA state and national conferences. Victor also had the opportunity to present his research on the mental health crisis in high schools to undergraduate students and professors at Harvard's Global Health Leadership Conference and has his work featured in the Harvard Global Vision Society magazine.

As an avid musician, Victor loves practicing violin and piano in his spare time. As concertmaster of Buddha's Light Youth Symphony Orchestra, 1st violin of Irvine Classical Players as well as Pacific Academy's Foundation Orchestra, he has been given many opportunities to express his emotions through music. Victor has had the chance to play the violin for the Vatican Cardinal in the Italian Pantheon, the French government in La Madeleine Church, and for the biggest Buddhist temple association, Fo Guang Shan, in Taiwan. Besides music, Victor is fluent in English, Spanish, and Chinese, and currently plays as the Varsity Tennis Captain of his school team. In addition, Victor was also Mock Trial Prosecution Attorney and MUN chapter president and awarded Best Delegate at USC MUN.