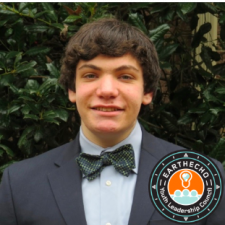 Evan Barnard is a 17 year old senior at Johns Creek High School in Johns Creek, Georgia. He developed a love for the ocean and outdoors at an early age, spending his summers on Tybee Island, Georgia, then started volunteering for the National Park Service and Chattahoochee Nature Center in middle school.

Receiving grants through Youth Service America from Disney Friends for Change and Radio Disney Heroes for Change, Evan led three Global Youth Service Day projects. He organized youth and adult volunteers, including members of the visually impaired community, to design and construct the trail, then wrote the Braille signs about natural features of the forest. Evan is using this trail as a prototype for more Braille trails across the U.S., and is lobbying legislators to better fund outdoor programs for the visually impaired and others with disabilities. In addition to giving a TEDx talk about his project as part of TEDx Global Youth Day, Evan has been awarded the Gloria Barron Prize for Young Heroes, a National Arbor Day Foundation Education Innovation Award, and President’s Volunteer Service Gold Award, and has been named an International Eco Hero, Prudential Spirit of Community Honoree, and national Carson Scholar.

An avid birder, Evan created the Georgia Young Birders Club and website to bring together youth from around the state for educational opportunities and birding trips. He has extensive leadership and project development experience, serving on multiple leadership councils including the Model Atlanta Regional Commission, 21st Century Leaders’ Leadership Council, and the Georgia State School Superintendent’s Youth Advisory Council. He is the leader of Team Dynamite, theTEDxYouth@theBeltline youth leadership team. Evan is also a national youth ambassador for Mentor Foundation USA and has served as Georgia Ambassador for National Child Awareness Month.