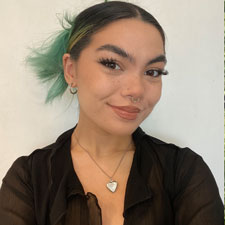 Cameron Armstrong (she/her) was born and raised on Treaty 1 Territory in Winnipeg, Manitoba, Canada. Currently, she is pursuing a Bachelor of Science in Microbiology at the University of Manitoba and is interested in water protection, lake management, and the environmental impact of water control structures and dams. Cameron has worked on multiple research projects in collaboration and partnership with Indigenous communities on Treaty 6 Territory, which combine Traditional Knowledge and Western science to mitigate environmental and cultural trauma, as well as the negative health impacts, of climate change in Northern Manitoba. Recently, Cameron has completed a project with Lake St. Martin First Nation which worked with community members to co-create a Youth-Elder Mentorship Model. The goal of this framework aims to utilize land-based and community healing methods in conjunction with Traditional Teachings to combat the effects of environmental racism.