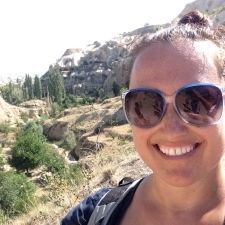 Since she was a young child, Amy Truemper has enjoyed exploring nature and seeing how things work. Originally planning to work in molecular oncology, it was an experience in the Peace Corps that led her to change paths and become a teacher. Volunteering as a Secondary Science Teacher in Lesotho, Amy discovered how much she loved helping others learn about the world around them. She also experienced a lifestyle that was far less damaging to the environment which has inspired her to educate and inform her school community on how they can make a difference with simple lifestyle changes. Amy has taught middle school science in Aurora, Illinois since 2002. In addition to participating in numerous science competitions such as Science Olympiad, FLL Robotics and Middle School Science Bowl, her students created an energy conservation team, The Environmentalists, which has won two national awards from the National Energy Education Development Project (NEED) Youth Awards Program.