Ever wondered where your #1 and #2 went after you flushed? And what exactly do we do with all those wastes? Join EarthEcho and the South Cross Bayou Advanced Water Reclamation Facility as we go behind the scenes of Pinellas County’s largest wastewater treatment facility to learn about how we recover our favorite waste, a solid #2, and make it into a safe product that can be used as a fertilizer to grow crops.  With streaming footage from inside our egg-shaped digesters to our fertilizer factory, we’ll give you a firsthand look at how science, technology, and engineering allow us to protect human health and keep our waterways clean from “poo-lution!”

Shea Dunifon has served as the Education Coordinator for the South Cross Bayou Advanced Water Reclamation Facility since January 2017 when Pinellas County Utilities launched an education program to connect its citizens, primarily students in grades K-12, to the STEM (Science, Technology, Engineering, and Mathematics) of wastewater treatment. Shea is responsible for leading facility tours of the 35 acre (33 million gallon per day or MGD, permitted) South Cross Bayou facility, visiting classrooms as a guest educator, and participating in local school programming such as STEM-related events. Shea has received awards at both the state and national level for her education efforts in the field of wastewater public communications and outreach.

Before joining Pinellas County Utilities, Shea worked in the soil fertilizer industry as an Agronomist after leaving Naples Botanical Garden in 2014. Her love of science (chemistry is her favorite) began back in 2007 after she travelled to Tamil Nadu Agricultural University, India, to study environmentally-friendly techniques for managing pests on agricultural crops. Upon returning to the states, she completed an internship at NASA Kennedy Space Center’s Space and Life Sciences Laboratory, studying how soil respiration rates allowed scientists to describe bacterial communities present in agricultural soils. 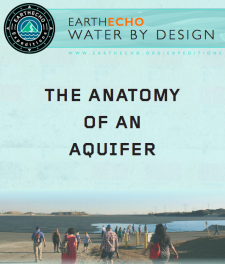 The Anatomy of an Aquifer

This design challenge moves your students from passive to active learners through a cross-curricular, hands-on team challenge in direct correlation to real-world issues of water conservation. Through this lesson, students in grades 6-8 will create a model of an aquifer to understand the structure of aquifers, how aquifers impact our freshwater supply and groundwater in regards to the water cycle.