America's National parks are her crown jewels: Yellowstone, Grand Canyon, Yosemite. But did you know that there are over 80 national parks that protect special ocean, coastal and Great Lakes places? The largest of those is South Florida's Biscayne National Park. Join us in meeting some of the park's rangers as they share the ways that the park's four ecosystems fit together, how the park fits in with other protected areas, and how all of us working together can protect our one and only ocean!

As a boy growing up in South Florida, Gary Bremen’s parents instilled in him an insatiable wanderlust fueled by an equally insatiable curiosity. They took him to places with names like Yellowstone, Grand Canyon and Carlsbad, and in so doing, set him on a career path as a National Park Ranger. Thirty-four years into that career (with 25 years of that being at Biscayne National Park), he still finds enormous satisfaction in discovering the lesser-known aspects of the world around him. He is a writer, speaker and storyteller whose work has appeared in national magazines, on television, radio and podcasts. He is the recipient of the National Park Service’s Freeman Tilden award for excellence in interpretation and the Crystal Owl award for training excellence, as well as a special award from the United States Coral Reef Task Force for his efforts to educate South Floridians about the park and its inhabitants. A proud graduate of the University of Miami, he lives in the little town of Wilton Manors with his husband Roger and their cats Oliver, Elliott and Amelia in an urban oasis filled with native plants and wildlife.

Maria Beotegui has lived in the Greater Miami area her whole life. There is no place Maria likes to explore more than the seashore. Maria loves to scour the sargassum wrack line for sea life or remnants of it. She receives a great sense of place from the sea. At age 8 she went on her first camping trip in the Florida Keys. Her family camping trips helped solidify her love for the outdoors.  Maria's made a career of teaching children through nature play and exploration. She has worked for almost 20 years at Biscayne National Park. Over the years, Maria has explored the mangrove shoreline, wrack line, and camped on the ancient coral islands of Biscayne with thousands of children. She's now interesting in learning the science behind why nature is so important to our well-being. She lives south of Miami with her three children, husband and chickens. When she is not working at connecting children in the Park, she is connecting her own children to nature through gardening, backyard campfires and just playing outside. 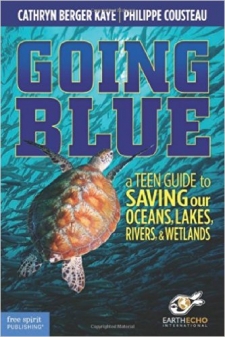 A Leader’s Guide to Going Blue

Going Blue: A Teen Guide to Saving Our Oceans, Lakes, Rivers, & Wetlands provides a close look at our oceans and waterways and our role in protecting this water planet.