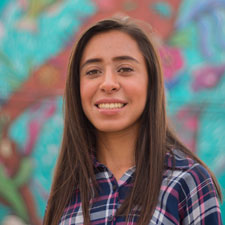 Salma Valeria Macias Torres was born in Mexico City, but now lives in The Bay of La Paz, Mexico. Currently, she is working on her undergraduate thesis about blue whales in the National Park of Loreto in the Gulf of California. For the last six years of her life, she has been volunteering with different NGOs because she is passionate about wildlife and ocean conservation. She is interested in defending wildlife and ocean conservation through initiatives in environmental education. Improving the ecological knowledge in communities is one of the most important factors to protect wildlife and resolve environmental problems, especially for young people as they are the most vulnerable sector. Such simple actions at the local level can have a global effect. She firmly believes that there is hope for a better world.

Together, Diego Arreola Fernandez and Salma Valeria Macias Torres developed a national campaign to increase the number of stakeholders and people involved in the 30x30 goal. Our events and activities were directed for two main audiences: people located in big cities, for which we developed our virtual events; and people in coastal communities, for which we’re organizing an MPA cleanup.

One of our main strategies was educating people and building awareness. For this purpose, we created informational content about the 30x30 goal, Marine Protected Areas, the situation in Mexico, as well as endangered species in our region, all of which were posted on social media and received over 4,000 likes and reactions. In addition to a petition with over 3,700 signatures, we also produced an informative and motivational video to educate and engage people to join the 30x30 Mexico Movement, which had over 1,000 views and 40 collaborators. Finally, we hosted 3 virtual events (an Instagram Live, a Webinar for adults, and a Workshop for children) to talk about the 30x30 goal, ocean conservation, the policy and science behind our campaign, as well as the solutions that we can all implement even from home! We had 144 people actively involved throughout these events.

Our second strategy was originally based on working with fishing communities, but due to COVID restrictions, we couldn’t. Therefore, we changed our focus and had the opportunity of working with the National Commission on Natural Protected Areas (CONANP), to organize and execute the cleanup of some fishing communities and wildlife areas in the Espiritu Santo Archipielago, located in the Gulf of California, to continue supporting and uplifting coastal communities.

In terms of collaboration, we had the opportunity of participating in an Instagram Live with UN Biodiversity and EarthEcho’s Youth Leadership Council; contributing to a video for 30x30 Indonesia; and participating at the 30x30 Argentina Webinar. We also had the honor of having Flora Gonzalez from 30x30 Argentina, joining our Instagram Live to talk about the differences between Mexico and Argentina, with an audience of 460 people. We were very grateful to have the support of WildCoastCostaSalvaje, Unidos por la Madre Naturaleza, Mexico Azul, and many other NGOs, helping us with the events and promotion of the 30x30 goal.

Fortunately, we were able to succeed in most of our milestones and planned outcomes, and made great progress in uniting people across Mexico, from our youngest participant (5 years old) to the oldest (94 years old), to support the protection of 30% of the global oceans by 2030. We were honored to work with EarthEcho International and hope to keep escalating this campaign in the upcoming future!