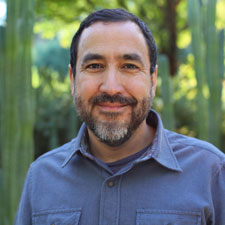 Convinced that stories have the power to change the world, Robert Pérez is the founder and chief exploration officer at Wonder: Strategies for Good.

The son of migrant farmworkers, Robert has dedicated the last 25 years of his life to working with people and organizations to achieve change within their walls and out in the world.

With support from the David and Lucile Packard Foundation, Robert and his long-time collaborator, Amy Simon, are co-authors of Heartwired: Human Behavior, Strategic Opinion Research and the Audacious Pursuit of Social Change, a strategy guide for change-makers. In Heartwired, Robert and Amy chronicle how the Heartwired approach to audience research and strategy has supported historic wins — from the freedom to marry for same-sex couples to making medical aid-in-dying a legal option for terminally ill people.

Previously, Robert was a senior vice president at Fenton Communications. When’s he’s not developing Heartwired strategies, Robert can be found out on an urban hike in San Francisco with his husband, Robert Francoeur (yep, two Roberts!).