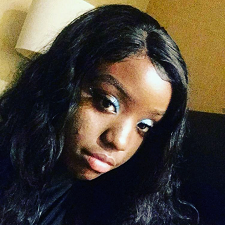 Princess Powell, a rising senior at Venice High School, has served in many leadership roles in her community, as she is passionate about the social justice issues that affect the conditions of her neighborhood and city. Such issues include education equity for students, and she works with the American Civil Liberties Union at the Southern California office to lobby elected officials and school board members to change harmful policies that affect low-income youth and youth of color. She does similar work with the community organization Community Coalition, where she advocates and studies the misallocation of funds within the Los Angeles Unified School District and the devastating effects residential segregation has on youth of color and also those who are underserved. She also has been working with Los Angeles mayor Eric Garcetti and his team for a little over a year to combat gun violence going on in the neighborhoods of South Los Angeles, and to implement different strategies to strengthen gang prevention programs, substance abuse facilities and make the access to college easier for youth from urban areas. Her future goal is to become a policymaker and publish legislation that protects the civil rights of California’s most vulnerable populations.