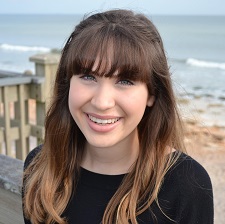 Madison Toonder is a Junior at Vanderbilt University pursuing a major in Organismal Biology and Biological Anthropology on a pre-veterinary track.  She is originally from St. Augustine Beach, Florida but spends her summers in south Florida to engage in field work and data collection as a Sea Turtle Night Technician.  Her work primarily consists of wildlife conservation research in the field and in the lab focused on comparative pathology and interdisciplinary “zoobiquitous” studies.  Over the past several years, she has collaborated with University of Miami Avian and Wildlife Pathology Laboratory and Loggerhead Marinelife Center to better characterize sea turtle health in a clinical setting by using novel methods to set reference intervals.

At age 18, she published her sea turtle research as primary author in the peer-reviewed Journal of Zoo and Wildlife Medicine.  She was a top research abstract finalist and recognized as the youngest presenter in the 67-year history of the International Wildlife Disease Association Conference.  For her previous work, she was included in Business Insider’s “Most Brilliant Scientific Discoveries that People Under 15 Have Made This Year” and was later named the International Go Blue Awards “Blue Hatchling” winner.  She was also a Sea Youth Rise Up delegate in Washington DC where she met with political leaders and led the World Ocean’s Day march.  Madison strives to use education to communicate her research findings to youth and industry experts alike; it is imperative to her that people of all ages and backgrounds collaborate to spread the message of conservation.  In this way, she often shares her work with youth audiences at speaking events and writes articles to break down higher-level science for various communities.

Outside of schoolwork and research, Madison trains with the Vanderbilt Women’s Volleyball Team as a middle-hitter, plays guitar, explores nearby nature trails and daydreams about sea turtles – her favorite animal.