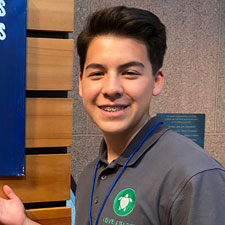 Kean Dao is a student scholar athlete, and is the Sophomore class Vice-President and Vice-President of Competitive events for DH Conley’s FBLA - which is the largest FBLA club in the state. I am also on my varsity tennis team, and outside of school I am a Hibachi Chef for my family’s restaurant. I have also been a volunteer for Love A Sea Turtle (LAST), for the past 7 years, where he has served as a camp counselor, student leader, and mentor; participating in land/river clean-ups, performing water quality testing, and met with and learned from conservation organizations all along the east coast. Working collaboratively with another Love A Sea Turtle member, he co-founded a youth-led organization called Environmental Droners. Utilizing drone technology to identify trash areas throughout his city’s land and waterways, Kean films the locations to showcase the amounts of debris found and for litter removal events. Environmental Droners was an idea brought to reality after winning a $500 Grip Tape Youth Driving Learning Grant in addition to donations from LAST. Environmental Droners also placed in the top ten in the world and was awarded the People’s Choice Award in the EarthEco Challenge. Kean not only directs Environmental Droners, but he collaborated with students and scientists at East Carolina University’s Water Resources Center to help develop a SmartTrash app for finding litter and marking its location, which aims to mobilize and engage people around the world to become apart of the solution in the plastic pollution crisis within the palm of their hand!