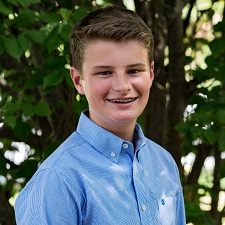 Greyson Graham is a fifteen-year-old that lives in Winterville, NC. He is a sophomore at South Central High School where he runs cross country and plays lacrosse. Currently, Greyson is an advanced SCUBA diver and is working on his master-diver certification. Also, he is the president of his sophomore class and plans to excite other people in his school about the environment.

Greyson also has a love for volunteering which sparked when he started volunteering for an organization called Love A Sea Turtle (LAST). For over three years, he has been a counselor at upstream/downstream summer camp where he teaches underprivileged youth about the fundamentals of water quality and why it is so important, especially in eastern North Carolina, where he lives. With the guidance of LAST, he has also become an EarthEcho Water Challenge Senior Ambassador. Through this role, he has taught thousands of youth and community members about water quality. Throughout these years he has also taken a leadership role in his community as he is a founding officer of the Eastern North Carolina Scuba Club and co-founded an initiative where he removes marine debris in his local waterways through SCUBA diving. Greyson has earned thousands of volunteer hours as well and has worked his way up to the Love A Sea Turtle youth council as well.