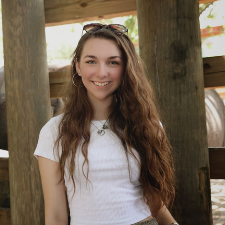 Faith is an active conservationist who is always seeking to make a change not only in the community, but in the world. She believes even the smallest actions will ripple into large and long-lasting changes. She is a two-time finalist for the Sea Turtle Hatchling award from Loggerhead Marine Life Center’s Go Blue Award ceremony, and recipient of the National Environmental Excellence Award from SeaWorld/ Bush Gardens. She has gotten the opportunity to collaborate with Bindi Irwin, Guy Harvey, Wyland, Jeff Corwin, Andy Casagrande and more!

Her love and respect for our oceans is evident by her enthusiasm to participate in projects around the state of Florida. She eagerly dives into any opportunity to showcase an appreciation for our underwater realm.

Faith is an ambassador for the Keep Fin Alive campaign originating in South Africa. With this endeavor, she introduces the general public to the beauty of sharks. Faith is working locally to derive empathy towards the plight of sharks while simultaneously shattering misconceptions perpetuated by media sensationalism. She directs a large amount of time on protecting sharks in the state of Florida.

Faith assists Sharks International in promoting marine conservation. This annual contribution includes an anti-finning campaign at SharkCon in Tampa, where she educats guests about various shark conservation initiatives. Additionally, Faith volunteers her time every October in St. Augustine, where she works with highly stigmatized predators like snakes and crocs while working with industry experts to deliver presentations that raise consciousness regarding the value of these misunderstood animals.

In January of 2019, she volunteered her time to cultivating and conducting an interview for a conservation magazine called Conscious Planet Earth that showcased sea turtle conservation She wanted to reach a wider global audience and raise awareness for her favorite species

With her time at EarthEcho, she has participated in habitat restoration events on the west coast, was a guest speaker at an international training, hosted a webinar and pioneered a holiday rooted conservation awareness project. The content was modified and presented to a variety of age ranges from upper elementary classrooms to the general public on social medias and blog posts. In a collaboration effort, she co-wrote material for an education lecture with an audience of 300 middle schoolers.