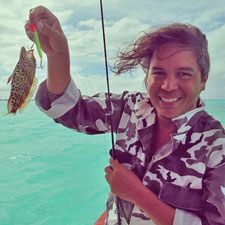 Angelo O'Connor Villagomez is an indigenous conservation leader from the Mariana Islands in Micronesia. He currently works for Pew to support Blue Nature Alliance, which aims to conserve 18 million square kilometers of ocean by 2025. Villagomez's approach to conservation is to integrate scientific research and cultural values to advocate for ocean protections which benefit people and nature. Villagomez previously lead efforts to designate the Mariana Trench Marine National Monument, assisted with the passage of two dozen shark conservation laws in Pacific and Caribbean island states, and authored IUCN resolutions calling for 30% protections of the ocean and defining industrial fishing.

Before joining Pew, Villagomez worked for the League of Conservation Voters, the Smithsonian Institution, and the Mariana Islands Nature Alliance. Villagomez received his formal education from Rollins College and the University of Richmond.