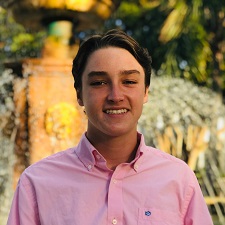 Jack Kincus is a resident of Vero Beach, Florida, where he is currently a junior attending Saint Edward’s School. This year will be Jack's third year of involvement with the Earth Echo Water Challenge, this time as a senior ambassador. Outside of school and environmental work, he enjoys playing varsity basketball and golf, as sports are one of the other driving forces behind his life. In his free time, Jack can usually be found somewhere near the water, either up a mangrove tunnel fishing in the Indian River Lagoon, or surfing and skimboarding on the east coast of Florida. What motivated Jack to join the EEWC was how he has seen the water quality of his local waterways decline sharply in recent years, Increasing the risk that the activities he holds dear could be taken away from him. In terms of environmental work outside of Earth Echo, Jack has participated in the Florida Envirothon for two years now. In his first year competing with his team, they won first place at the regional event and second place at the state event, this year they also won the regional event but are currently waiting for the state competition which has yet to occur.