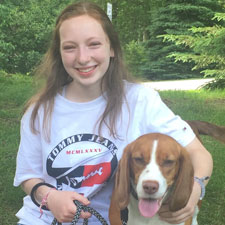 Elise Taylor is a rising junior at Hudson High School located in Hudson, Ohio. Since moving to Hudson, Elise has developed a love for nature. She frequently visits local parks like Cuyahoga Valley National Park to go hiking and kayaking. During the summer, Elise volunteers at Moebius Nature Center where she has learned about water quality and wildlife. She is also a former member of Sierra Student Coalition’s Climate Justice League which exposed her to the relationship between social and environmental issues, as well as the importance of environmental justice movements. Elise has also volunteered with Sierra Club Ohio to make social media posts for events like World Refill Day.

At her school, Elise is a member of the Speech and Debate Team and has taken on leadership roles in community service groups. In her spare time, Elise plays the flute and takes dance classes. Elise hopes to make a positive impact on the environment and learn more about water quality as a Water Challenge Ambassador.