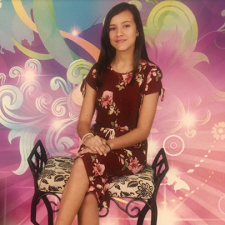 Ariana Nicole Negrón Pacheco attends Thomas Armstrong Toro School Specialized in Science and math. Something that she always likes is to take care of the environment and protect it. Since she was a little child, she has recycled and participated in cleaning of coasts, rivers, fields and their surroundings. She also has a desire to protect nature and bodies of water. Another thing about her is that she likes to study everything that has to do with environmental science; like hurricanes, earthquakes, tsunamis, soil erosion and more. Also, a quality she has is being a leader. In 2015, she began to practice Chess.  Her grandfather does not know how to play well but he taught her the name of the pieces and the different moves.  In the last competition she won third prize in the Regional Competitions in Ponce. She has also practiced Taekwondo since 2016.  She likes it because of the discipline and physical fitness. Finally, where Ariana lives, there is a shallow well, where water is pumped out frequently. Because of this, she has also learned how important it is to take care of the surroundings, especially for oil spills and other dangers. This is also one of the many reasons why she considers it an honor to be an Ambassador of the EarthEcho Water Challenge.